“Tony Farrell is a graduate of Bath University, where he was fortunate to study with Peter Lutz. His fortunes grew further when he moved in 1974 to Canada and the Zoology Department at the University of British Columbia to complete his Ph.D. degree under the superb tutelage of Dave Randall. In 2004, Tony returned to UBC when he accepted an endowed research chair in Sustainable Aquaculture.

Farrell is broadly interested in the comparative and environmental physiology of fish. He and his research team are primarily interested in how cardiorespiratory systems perform under extreme conditions and the implications for our general understanding of cardiorespiratory physiology and the conservation of aquatic ecosystems. While his primary emphasis is on wild and farmed salmon species in British Columbia, he and his team also study fish found in the frigid waters of Antarctica and Canada’s Arctic. 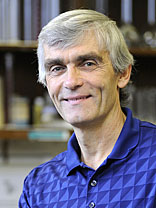